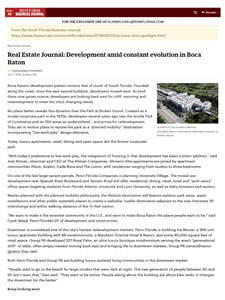 Boca Raton’s development pattern mimics that of much of South Florida. Founded along the coast, once the east neared buildout, developers moved west. As land there now grows scarce, developers are looking back east for infill, rezoning and redevelopment to meet the city’s changing needs.

No place better reveals this dynamic than the Park at Broken Sound. Created as a model corporate park in the 1970s, developers several years ago saw the Arvida Park of Commerce and its 700 acres as underutilized – and prime for redevelopment. They set in motion plans to rezone the park as a “planned mobility” destination incorporating “live-work-play” design elements.

“With today’s preference to live-work-play, the integration of housing in that development has been a smart addition,” said Joel Altman, chairman and CEO of The Altman Companies. Altman’s Altis apartments are joined by apartment communities Allure, Avalon, Cade Boca and The Lumin, with residences ranging from studios to three bedrooms.

On one of the last large vacant parcels, Penn-Florida Companies is planning University Village. The mixed-use development near Spanish River Boulevard and Yamato Road will offer residential, dining, retail, hotel and “tech-savvy” office space targeting students from Florida Atlantic University and Lynn University, as well as baby boomers and seniors.

Master-planned with the planned mobility philosophy, the lifestyle destination will feature outdoor park areas, water installations and other public assembly places to create a walkable, livable destination adjacent to the new Interstate 95 interchange and within walking distance of the Tri-Rail station.

“We want to make it the smartest community in the U.S., and want to make Boca Raton the place people want to be,” said Frank Weed, Penn-Florida’s VP of development and construction Downtown is considered one of the city’s hottest redevelopment markets. Penn-Florida is building Via Mizner, a 366-unit luxury apartment building with 88 condominiums, a Mandarin Oriental Hotel & Resort, and some 60,000 square feet of retail space. Group P6 developed 327 Royal Palm, an ultra-luxury boutique condominium serving the area’s “generational shift” of older, often empty-nesters moving back east and bringing life to downtown markets, Group P6 owner/director Ignacio Diaz said.

Both Penn-Florida and Group P6 are building luxury assisted living communities in the downtown market.

“People used to go to the beach for large condos that were dark at night. The new generation of people between 40 and 65 don’t want that,” Diaz said. “They want to be active. People asking about the building ask about bike racks. It changes the downtown for the better.” 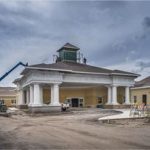 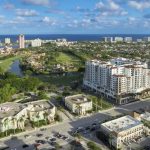