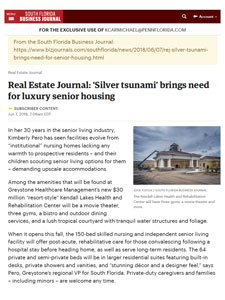 In her 30 years in the senior living industry, Kimberly Pero has seen facilities evolve from “institutional” nursing homes lacking any warmth to prospective residents – and their children scouting senior living options for them – demanding upscale accommodations.

Among the amenities that will be found at Greystone Healthcare Management’s new $30 million “resort-style” Kendall Lakes Health and Rehabilitation Center will be a movie theater, three gyms, a bistro and outdoor dining services, and a lush tropical courtyard with tranquil water structures and foliage.

When it opens this fall, the 150-bed skilled nursing and independent senior living facility will offer post-acute, rehabilitative care for those convalescing following a hospital stay before heading home, as well as serve long-term residents. The 64 private and semi-private beds will be in larger residential suites featuring built-in desks, private showers and vanities, and “stunning décor and a designer feel,” says Pero, Greystone’s regional VP for South Florida. Private-duty caregivers and families – including minors – are welcome any time.

“In the last 10 to 15 years, all our new facilities and renovations are focused heavily on luxury,” said Pero, whose company has 630 beds in South Florida and 3,000 rooms in 28 facilities statewide. “We have a hugely growing senior population. It’s called the ‘silver tsunami.’” Greystone’s Kendall Lakes property is one of several such projects taking shape, and it’s no surprise that South Florida has a spate of senior living properties on the map. The tsunami is only growing, according to statistics from the Florida Healthcare Association. Americans aged 65 and older will double to 71.5 million by 2026 and, among those turning 65, almost seven in 10 will need some form of long-term care, according to the FHA website.

To some, this wave of aging baby boomers and their predecessors is golden-tinged. Many cannot live alone, but want more luxury than is found at a traditional senior or

retirement home. Luxury doesn’t come cheap. Statewide, the median annual cost of care for a private room in a nursing center is $94,900, with the median annual cost for a private room in an assisted living facility running $37,200, the FHA notes. While long-term care insurance will cover some of the cost for services necessary for activities of daily living, most clients are private pay, executives said. A move to the urban core is among the latest trends. Riverwalk Residences of Las Olas from Ocean Land Investments is a planned senior living community slated to rise along Las Olas Boulevard in downtown Fort Lauderdale.

Once completed, the 42-story tower will offer independent, assisted and memory care residents such amenities such as five-star restaurants with nationally renowned chefs, fitness and physical therapy centers, and a ground-floor gourmet market that is open to the public. Construction is scheduled to start next spring, with opening slated for 2021, according to a news release. In Boca Raton, 375 Royal Palm from Penn-Florida Companies will be a nine-story assisted living and memory care facility with 193 studios, one- and two-bedroom residences for assisted living and memory care. The majority of residents will likely live within 7 miles of the planned building, said Frank Weed, VP of development and construction with Penn-Florida Companies. Moving downtown means dining, shopping and cultural facilities are a walk, bike ride or Uber ride away, he said. “Most are very active,” he said. “They’ll be out and doing things.”

The Concierge, a planned nine-story property, will offer “five-star resort-type living facility for seniors,” said Ignacio Diaz, owner/director of developer Group P6. It is to feature 122 studio, one- and two-bedroom units, with restaurants, a spa, salon, zen garden and rooftop pool. It will serve assisted living, memory care and active independent living needs. “Senior living serves a younger, healthier crowd who don’t want to take care of their homes, who want to share their lives,” Diaz said.

In the Broward suburb of Weston, The Palace at Weston will feature 320 senior living units awash in high-end amenities. Residents will enjoy happy hour with live music, hors d’oeuvres and wine; a full-time social director; classes from the University of Miami Osher Lifelong Learning Institute; and a theater with a stage and movie screen. Leasing should begin in 2019. Sister property The Palace at Coral Gables was styled after the Four Seasons Hotel George V in Paris and earned the National Association of Home Builders’ 2014 Gold Award for senior housing

“This attracts the most affluent market,” said Adam Rosenblum, VP of marketing with The Palace. “That’s what we’re all about. In South Florida, you have a large segment of successful and educated people. That may be the seniors, or their adult children. The families want their parents to be in the best situations possible for their final years, and you want to keep that standard of living.” 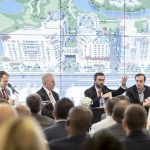