Units Will Rise Next to Mandarin Oriental Hotel

A developer plans to use a new $225 million construction loan to build the final piece of a $1 billion luxury development located 45 miles north of Miami in Boca Raton, Florida.

The Residences at Mandarin Oriental, Boca Raton is scheduled to be complete in about two years, at the same time as a Mandarin Oriental Hotel, according to developer Penn-Florida Cos. Both 12-story projects, along with a 366-unit apartment building, are part of the 2 million-square-foot Via Mizner in downtown Boca Raton.

The 92-unit Residences condominium offers ocean and golf course views. Units range from 1,500 to 9,000 square feet and are priced from $2 million to $19.5 million. Residents will have access to the amenities of the 164-room hotel.

Boca Raton-based Penn-Florida has not disclosed the exact number of units under contract.

“Pre-sale velocity for The Residences is tremendous as people have come to understand the investment potential as well as the unique lifestyle,” Chief Executive Mark A. Gensheimer said in a statement.Some real estate analysts have questioned whether Boca Raton can attract luxury buyers for a development that isn’t on the water, especially at a time when condo prices are leveling off and softening.

But Via Mizner is near the Boca Raton Resort & Club, which sold for a South Florida record price of $875 million in June to the founder of the Dell computer company.

And while the housing market is near its peak, any slowdown almost certainly will be minor compared to the historic collapse more than a decade ago, said Ken Johnson, an economist and real estate professor at Florida Atlantic University.

Johnson cited statistics from Indiana University’s StatsAmerica that show Boca Raton’s population increasing by 15% over the next decade, boosting the demand for housing. He also pointed out that the housing market will have time to normalize by the time the Residences condo opens in 2021.

“Whatever is going to happen will have happened and been corrected,” Johnson said in an interview. “I don’t see any problems attracting the high-end purchasers to Boca Raton.”

For the Record: Anthony Orso, Bill Weber and Henry Stimler of Newmark Capital Market Strategies arranged the financing on behalf of the borrower. SB Architects and Nichols Brosch Wurst Wolfe are designing Via Mizner. Straticon is the general contractor on the project. 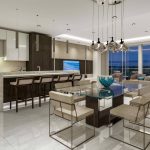 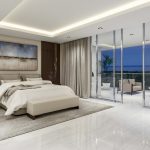