101 Via Mizner first of 3 new buildings on E. Camino Real 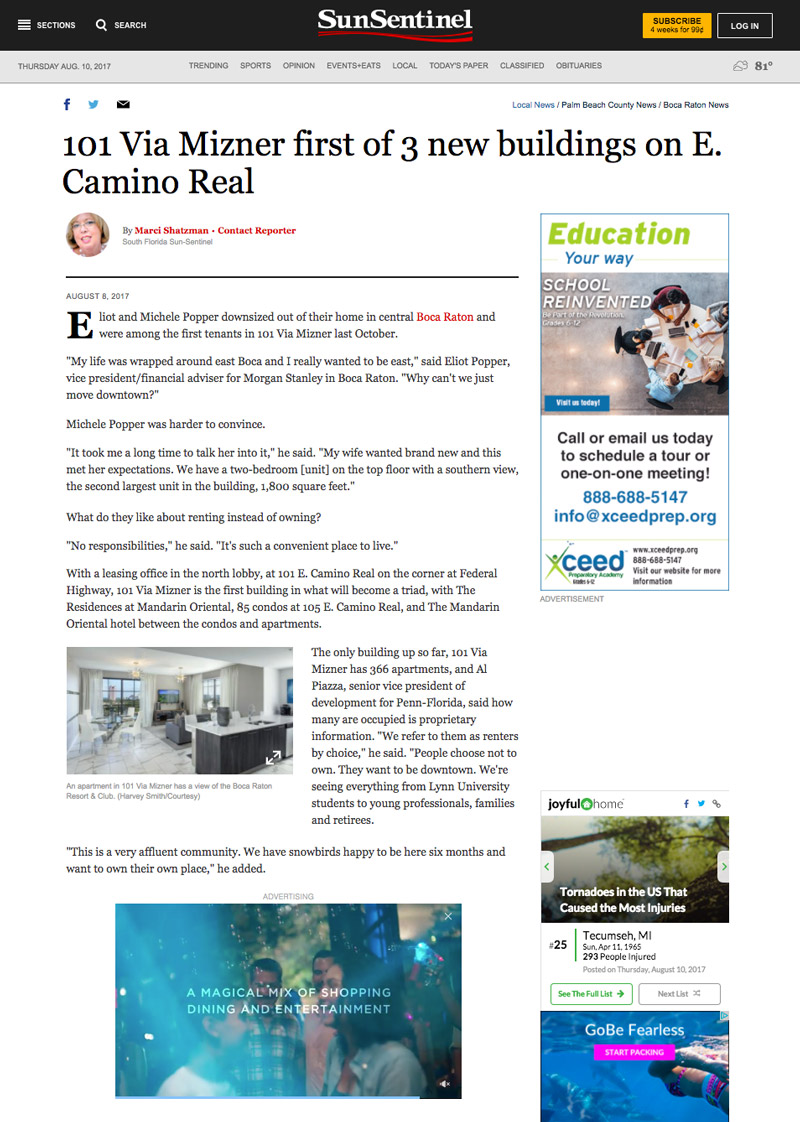 Eliot and Michele Popper downsized out of their home in central Boca Raton and were among the first tenants in 101 Via Mizner last October.

“My life was wrapped around east Boca and I really wanted to be east,” said Eliot Popper, vice president/financial adviser for Morgan Stanley in Boca Raton. “Why can’t we just move downtown?”

Michele Popper was harder to convince.

“It took me a long time to talk her into it,” he said. “My wife wanted brand new and this met her expectations. We have a two-bedroom [unit] on the top floor with a southern view, the second largest unit in the building, 1,800 square feet.”

What do they like about renting instead of owning?

“No responsibilities,” he said. “It’s such a convenient place to live.”

The only building up so far, 101 Via Mizner has 366 apartments, and Al Piazza, senior vice president of development for Penn-Florida, said how many are occupied is proprietary information. “We refer to them as renters by choice,” he said. “People choose not to own. They want to be downtown. We’re seeing everything from Lynn University students to young professionals, families and retirees.

“This is a very affluent community. We have snowbirds happy to be here six months and want to own their own place,” he added.

“We have 42 different units,” Melissa Myers, senior director marketing for Penn-Florida, said about the floor plans on a tour given to prospective residents considering a one-year lease.

“We partner with Clive Daniel Homes,” the home-furnishings store in Boca Raton, she said. “They did both models.”

There are four stories of parking and the amenities level is on the fifth floor where the tour started with an indoor self-service café with coffee. There’s a bar and game room and adjoining club room with six televisions and seating for 50.

The fitness center has yoga, spinning and online video classes. There are locker rooms and steam rooms for women and men. The gym overlooks the pool and pool deck. There’s seating with a reflecting pool on the other side, and the company plans to install barbecue grills.

Views are a big selling point.

“Three-hundred of the apartments have a golf course and ocean view,” Piazza said. “The average apartment is 20 percent bigger than most rentals and every one has a balcony.”

Karen DeMar came out of her apartment during the tour. She moved in last October with her husband Bruce, she said. They rented their two-bedroom, two-bath, 1,200-square-foot apartment from blueprints. It has a large walk-in shower with a bench. They’re empty nesters and they just retired. 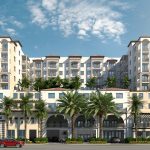 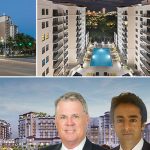